The book of Kui indigenous community has been written by 16 juniors at Liger Leadership Academy to promote this group to the outside world. To illustrate that they have a different daily lifestyle, culture, and history. We have been spent for 7 weeks to research on this project by going on a trip and researching on the internet to get all the information of Kui community to plug into this book. We believe that this book will bring you a new topic to learn or discuss. As you go along, you might explore something new and enjoy.

Identity is the one who shows your origin, without identity, it is very complicated to identify to know who you are? In the whole universe, the human has different genes to define themselves in uncommon style. A human being different from one to another. Both minority faction and majority faction, the way that they work are truly contrast. Minority community on earth are very separate from each other. In Kampuchea, there are many types of indigenous group that still exist. One of an indigenous group is almost existing is “Stieng”. This group is mostly depending on agriculture are the main job. On April to May, which is a rainy season in Kampuchea, so everybody is preparing to farm for the rest of the year. The crops that Stieng people grow are cassava, pepper, rubber, and cashew nut. They farm the cassava on red soil from April and pick the crop on December, the end of the year. One kilogram of cassava is 400៛. In the whole year, they got 5,000,000៛ to 6,000,000៛ from cassava after sold to China company or a middle man. On the other hand, cashew nut is also playing in a role. One kilogram of cashew nut is 3000៛ that sell to the middle man so int he whole year, they got 1,000,000៛ to 2,000,000៛. Stieng farmers use the natural soil to put into the farm. For the rubber, they farm in a large area that not relevant to cassava or cashew nut and even other plants. One year, they got  4 tons of the rubber to sell for a middle man for 1,600៛ per kilogram. And last, pepper, this type of plant need a special sol to grow on like black soil or red soil, for the whole year, they got 1-3 tons of pepper and sell one kilogram for 40,000៛ to the first man or a middle man in the village. The job is very necessary for life so Sieng people hope to have a new job that can help to improve their lives smother beside farming.

Healthcare and clean water are  really important for everyone to survive . In Stieng community, most of the people using water from well and they filt it with the water filter. They believe that water from well is the most clean water for them. Some people can’t afford to dig their own well so they decided to buy the water that is in the container. Furthermore, most of people that live in that community don’t access to their own bathroom. Most of them go to the forest to dig the land and serve as a bathroom; they knew that clean water, health and hygiene are really important to them but they just don’t have enough money to build one. People there really hope that in the future, this country will develop further so the people in this community will have access to clean water, and bathroom.

It is Stieng tradition that they always collaborate with each other whenever there is a ceremony or any other emergency. The people are so generous and they always participate in any events. Before 1970, they always gather and have a discussion together to help each other. Whenever they got food, they shared each other, and there wasn’t any business going around during that time. There is a ceremony together in the village or an individual ceremony such as wedding or funeral, they always help each other with money and organizing. No matter they are rich or poor, if they have a better living condition, they will help to pay money if not they will help with their hands. When someone gets sick in the community , people help to carry to the hospital, provide medicine, be with the patient overnight and visit them regularly. This had been practiced for a long time, but currently, due to they have a better living condition, they seem not really care as much as before. And people seem to care for themselves as the first page. Somehow,  there are most people that still collaborate and help each other and that’s really nice.

On Wednesday afternoon, my exploration called indigenous community have a trip to Stieng community. It was night and dark when we arrive there. We get out from the bus and put our stuff down then we talk to the people until every get hungry then we cook foods. After the diner, some of us go take a shower and some don’t, then we go to sleep. The morning comes, everyone woke up and again some students take shower and some didn’t. We walk to other places next to where we stay last night. I want to interview some kids around there. I asked them a question “What do you want to be in the future”, then they said “I want to be a farmer”, then I ask “why do you want to be a farmer”, they said “because my parent is a farmer so I want to be a farmer too!”, we asked some more questions and then we leave. I walk around to see other kids to interview and we found another kid to interview, we asked the same questions as before, surprisingly they said the same answer that they wanted to be a farmer because they love farming and they want to help their parents farm. Their future depends on what they like and they can be who they wanted to be in the future.

Normally, we only see one kitchen in each house. That is very usual in Cambodia as well as the whole community. However, this don’t really apply to kui indigenous people. In Bankarn Paul village, where kui people live,  most of the house is home to two or three kitchens. This might sound so fascinating because why do we need that many?

This is what the village chief of Bankarn Paul said:

“ Kitchens is where we cook food so we need to make sure we have it cook our food to eat. Some of us have two kitchen and some have three kitchens. The kitchens are located in front of the house, under the house and behind the house. During rainy season the water might get into the kitchen so they have other kitchen to cook ”

A chief and farmer in the village mention the same thing and this sound very interesting. 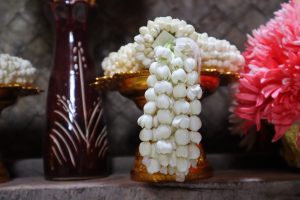 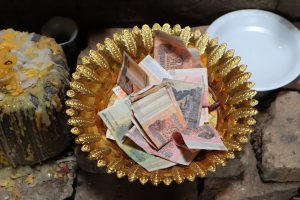 Along the red grovel road to a Stieng community in Krorng village, there are wooden houses with two floors pass by. Those houses seem like human faces with two big eyes and one tongue stuck out from a big mouth. There are so many modern farming machines under each house, which clearly shows that they are focusing on agriculture as their main job. Moreover, around each house, there are different types of tree fruits, such as cassava trees, mango trees, coconut trees, sweet potato trees, banana trees, papaya trees, jack fruit trees, star gooseberry trees, passion trees, and sugar-apple trees. Plastic is not popular in this community, so the environment there is clean. The village passed by, outside the village, there are a lot of rice fields lay on the ground waiting for people to grow rice.

The solar panels are on each of every house in this village. Stieng people use them to light up the darkness at night. Each light that bright up each house, together is the stars in the sky at night time. However, time by time, the light from the solar panel go faint and faint. The sunshine from the sun clearly shows that it is morning. As usual, the cockcrow started at an early time around 3 AM to wake everyone up from the lazy bed. In Kakdek, (the twelfth month of the year which also the coldest month in Cambodia) around 4 to 5 AM, there are flames from the fire camps which everyone in this village, Stieng people do to heat themselves up from the coldness of this season.

“The longer you will be here, the more fluent you will get”, is said by the ladies in the community when I asked them how long does it take to learn the spoken language. Stieng, one of the other indigenous groups in Cambodia who has a community located in Krorng village, Snuol commune, Snuol district, Kraches (Kratie) province. Stieng language is not written, it is only a spoken language. I always thought that learning a different language is hard but when I went there, the ladies made it easy for me to learn their language (Stieng). For every word that I asked for translation to, she always said the word then continued with something similar to “that’s it, it’s easy, right?”. It made me feel relaxed and that I could actually learn the language very easily. Some words that I learned are: 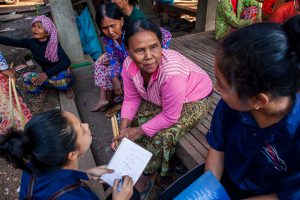 Some words sound the same as the Khmer language, they are; 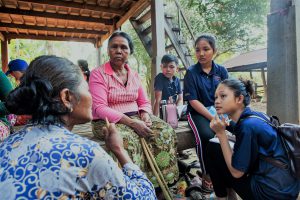 In the village, some are Cambodians. The ladies said that some people that are Stieng are afraid to speak their native language because they want to fit in with other Cambodians in the village. However, most of the time, they speak their language to each other. Elders in the village hope that the younger generation of Stieng understands the importance of preserving their language. I wish I could have stayed in the community longer and learn the language because it is always interesting to learn new things.

How would you act toward people to show your friendliness? How would you making an assumption of the act of friendliness? As the matter of fact, everyone has their own type of assumptions  through this topic. Some people might think smile shows friendly and some might not. Focusing on the Indigenous community of Cambodia, there’s one of the indigenous group that have a belief through the stairs of the house, it lead to the story of Stieng community.

There are more than 20 indigenous groups that located in different region of Cambodia and Stieng community is located at Snoul district, Kratie province(eastern). It is small community with peace. Most of their daily life has a similarity with Cambodian.

Interestingly, most of the house at the Stieng community are all have stairs which they have a belief on it, specifically what should and should not we do to that.

Did you know that Stieng people welcomed people by giving the visitor a cup of wine? As we’re the visitors, we should show respect through drinking or at least taking a sip of the wine which showing our acceptance. P’nong (one of the Cambodian Indigenous Group) people do so.

However, if Stieng people invited the guests to their house, it might be rude to swing the feet by their houses stairs. Those who swang their legs might cursed as well. We can’t really say it is wrong to not have people swing their legs by the stairs of your house. It is an interesting facts for people should know while visiting the community.

Respecting people is very important because it might define who we are. We should respect everyone even though we don’t respect their opinion because it is a the point of view that can’t be proven whether it’s right or wrong.